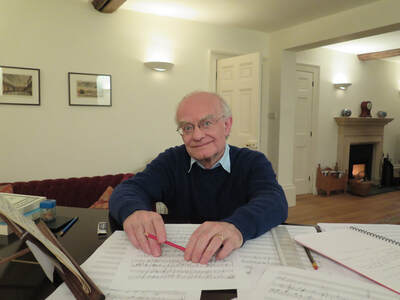 Herbert Howells Society President
John Rutter was born in London and studied music at Clare College, Cambridge. He first came to notice as a composer during his student years; much of his early work consisted of church music and other choral pieces including Christmas carols. From 1975–79 he was Director of Music at his alma mater, Clare College, and directed the college chapel choir in various recordings and broadcasts. Since 1979 he has divided his time between composition and conducting. Today his compositions, including such concert-length works as Requiem, Magnificat, Mass of the Children, The Gift of Life, and Visions are performed around the world. His music has featured in a number of British royal occasions, including the two most recent royal weddings. He edits the Oxford Choral Classics series, and, with Sir David Willcocks, co-edited four volumes of Carols for Choirs. In 1983 he formed his own choir the Cambridge Singers, with whom he has made numerous recordings, and he appears regularly in several countries as guest conductor and choral ambassador. He holds a Lambeth Doctorate in Music, and in 2007 was awarded a CBE for services to music.


Further information about the work of the Society can be obtained from the Hon. Secretary, Andrew Millinger (andrew.millinger@virgin.net) or the Membership Secretary, Julian Parkin (julian.parkin@hotmail.co.uk).

HOWELLS on Facebook
Member of Facebook?
Use this QR code or search 'Herbert Howells Society' to join our group.
Worship﻿ful Company of Musicians