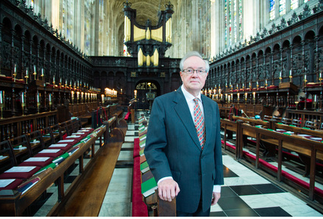 
It is with the deepest regret that we record the sad death of our President, Sir Stephen Cleobury CBE who died on Friday 22nd November (St Cecilia's Day) after long illness.

Stephen was appointed President of the Herbert Howells Society following the death of our founding President, Sir David Willcocks. He had been a great friend to, and supporter of, the society for many years before that as a Vice-President and hosted the society at a number of events in King's College, not least the two Howells & Stanford weekends.

His most recent (and last) recording from King's was the all-Howells double CD which included An English Mass, the completed 'Cello concerto, the Collegium Regale Te Deum and Magnificat in their orchestral versions as well as three organ pieces. The double CD received a number of five-star reviews after it was released in June. He has undertaken valuable editing work for the society and produced an entirely new edition of Stabat Mater which has been used for the recent Bach Choir recording.

The Society is sending condolences to his widow, Emma.

The college will be holding a memorial service for Stephen later in the academic year and we will advise members when details are known.

Further information about the work of the Society can be obtained from the Hon. Secretary, Andrew Millinger (andrew.millinger@virgin.net) or the Membership Secretary, Julian Parkin (julian.parkin@hotmail.co.uk).